I am passionate about music. Studying classical piano growing up, I have always believed in the power of music, in all its forms, to convey emotions and evoke feelings.

I am a professional baritone, pianist, organist, and violinist. I formally studied music for more than 15 years, and I’m excited to continue to share my performance talent with family and friends, both new and old.   I’ve played and sang for hundreds of Catholic masses, dozens of weddings (primarily Catholic wedding liturgies), funerals, anniversaries, choral concerts, retirement parties, and sporting events at which I’ve sung the National Anthem. 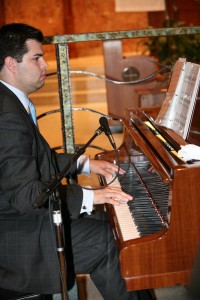 From 2001 to 2005, I regularly served the Catholic parish of St. Joseph in Cold Spring, KY, as cantor and accompanist.   During that time (in 2004), I began singing and playing violin, piano, and organ at weddings.   Between 2005 and 2006, I planned, sung, and played keyboard for the weekly Saturday evening mass at St. John the Baptist Catholic Church in Wilder, KY.

When I moved to Washington, DC, for college, I became music director of the American University Catholic Choir & Ensemble in 2007 until 2010. In this capacity, I planned weekly campus Catholic liturgies, an annual concert, and special events. In 2008, I was selected to join the 500-member Washington Papal Mass Choir for the Mass celebrated at the then-new Washington Nationals Stadium by Pope Benedict XVI.

More recently, from 2010 to 2012, I was a member of Schola Cantorum at the Catholic Community of St. Thomas More in Chapel Hill, NC. Participating in the choir under the direction of composer Roger Petrich, I also served as cantor and soloist.

I currently reside in Cold Spring, KY, and am a pastoral musician at St. Joseph Catholic Church. I regularly substitute at Holy Spirit Parish in Newport, KY, and St. John the Baptist Parish in Wilder, KY. I am a member of the National Association of Pastoral Musicians and the Church Music Association of America.

I am available to help you, your family, or your community make an upcoming event even more special by adding the power of music. My unique talents in playing, singing, and planning weddings and a host of other liturgies and events can make special days even more memorable.   Upon request, I am also available to travel throughout the Midwest, Mid-Atlantic, and South.

Back to Main Music Page